Low SHGB while on first cycle

I just got test results back showing that my SHBG is low.... what does this mean

p1nchharmonic said:
I just got test results back showing that my SHBG is low.... what does this meanView attachment 192619
Click to expand...

By the post, I'm not sure what you had checked. Was it only SHBG, and Estro?
Beside Testosterone, it says N/A.

p1nchharmonic said:
I just got test results back showing that my SHBG is low.... what does this meanView attachment 192619
Click to expand...

Is this mid cycle? Post Cycle? You don't specify.

E2 is at the high end of normal for this tests range.
Low SHBG is good. (Free Test) as noted already.
Your Total T is probably higher than the range permitted to test. (Beyond 2100)?
So, this is mid cycle? I'm guessing yes.

Letrone by BLR would be good to keep that E2 in check.
(Last day of our March 30% off sale! MADMARCH)

Not knowing what SHBG is; is kind of telling here. You should
do some research on all the major components of blood tests
for your own safety. Do you have a PCT lined up?
_______________________
BLACK LION RESEARCH

E2 is at the high end of normal for this tests range.
Low SHBG is good. (Free Test) as noted already.
Your Total T is probably higher than the range permitted to test. (Beyond 2100)?
So, this is mid cycle? I'm guessing yes.

Letrone by BLR would be good to keep that E2 in check.
(Last day of our March 30% off sale! MADMARCH)

Not knowing what SHBG is; is kind of telling here. You should
do some research on all the major components of blood tests
for your own safety. Do you have a PCT lined up?
Click to expand...

Oh, my bad. I saw your other post and didn't connect them.
I see where you may be thinking "Low SHBG" to libido by it's monicker.
It's all about the Free Testosterone my man. Yours is very good.

Now then, the free estrogen on the high end of normal could be costing you.
Estrogen is important but you could do to lose some of that.
Hence my suggestion for Letrone. (Take at night)

The tesosterone free and total should be coming in today at some point.

For consistency (I think I said this on your other post), imo your e could be higher with no issues (and additional benefits). Personally I would reduce your ai usage.

What is your SHBG normally when not on any Testosterone? (Off cycle)
It shouldn't be below range. Do you have blood sugar issues? Diabetes/Pre-diabetes? Could also be liver issues; providing us pre-cycle labs, CBC/CMP would be helpful.
Single digit SHBG typically only happens when on DHT-derivative AAS like Oxandrolone for example.

Renew1 said:
By the post, I'm not sure what you had checked. Was it only SHBG, and Estro?
Beside Testosterone, it says N/A.

What you said lower shbg raising free test is a good thing right? 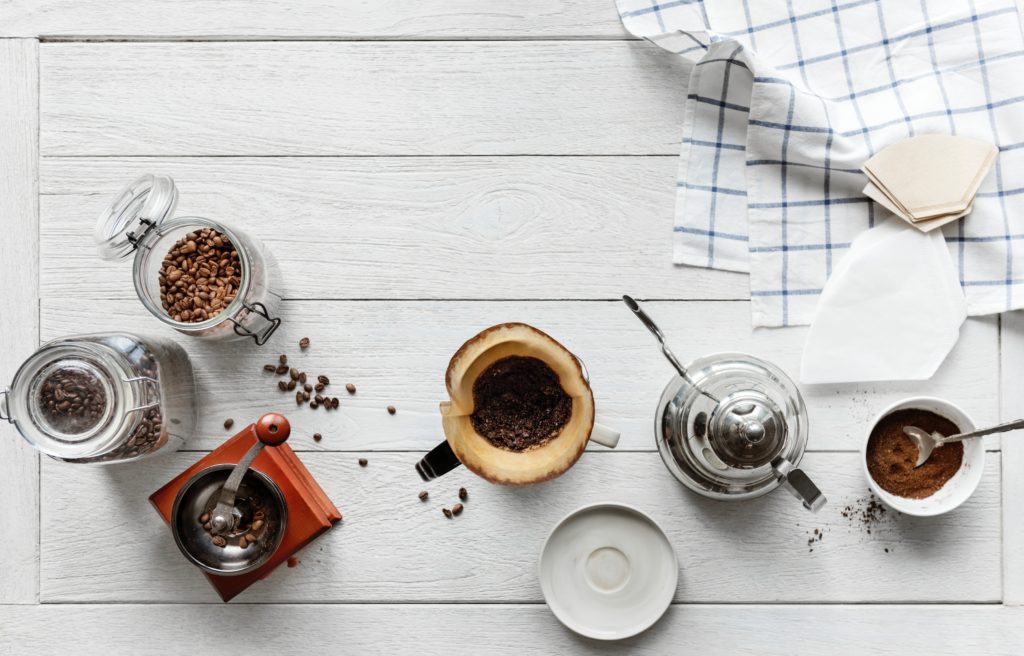 Sex Hormone Binding Globulin binds and transports testosterone. Read on to learn how SHBG is tested and the symptoms of high levels.

There was a study I can't find atm that shows L-carnitine can inhibit SHBG, so I always take that on a cycle to keep SHBG low and you'll have more free testosterone floating around.

Ok, I was mistaken. L-carnitine has been shown to increase androgen receptor density, so it's a great addition to a cycle, but doesn't seem to have any effect on SHBG (although I swore I read this somewhere.)

Supplemental L-Carnitine L-Tartrate at 2g daily has been shown in vivo to increase the density of Androgen Receptors in muscle cells over 21 days.[204] Although this mechanism would not increase testosterone levels per se, it may increase the effects of testosterone as they are vicarious through its receptors.
Click to expand...

Life Extension also has a good article on SHBG:

Do You Know Your Sex Hormone Status - Life Extension

I'm hunting for the carnitine study, but I can't find it. If I come across it, I'll update this post with the study.

Androgenic responses to resistance exercise: effects of feeding and L-carnitine (Link shrunk because it wasn't showing up properly from Pubmed.

Looks good your e2 is fine where it’s at man. You need estrogen to build muscle. Don’t take anymore AI then you have been unless it continues to climb or you can feel it in your nipples. You don’t want to crash your estrogen.

FINALLY got my test results from last week. what was the amount of gear and cycle you ran again and where in the cycle did you get bloods.

I was reading more about SHBG, and I found out that I was thinking about Urtica dioica. Urtica dioica reduces SHBG levels.


The effect of extracts of the roots of the stinging nettle (Urtica dioica) on the interaction of SHBG with its receptor on human prostatic membranes. - PubMed - NCBI


Lignans from the roots of Urtica dioica and their metabolites bind to human sex hormone binding globulin (SHBG). - PubMed - NCBI

San Estrodex is a good formula of herbs, including Urtica dioica and DIM that help reduce e2 levels naturally. It's good to take on cycle and post cycle.

is that standard in many tests for bloodwork like yearly physical? I know some of the discount blood work places have you check a "female" hormone panel that has all the stuff a guy needs.

My cross post about this topic.. This should help better explain things for you OP

As many of people on the panels know - I blast & cruise, more blasting than cruising with switch hitting.. I had blood work that was expected to be pulled from my Doc, he actually forgot and I had to remind him, it worked out well because I wanted to come off for a bit and do a little small cruise (6 weeks'ish) and give my CNS a moment to recoup as well as giving my REC's a brake..

I figured this would also be a great opportunity to take advantage of Masteron and Proviron used in conjunction with my TRT.. For the following reasons to keep libido strong, depression at a low at the same time optimizing the most out of my TRT dosage..

The addition with Proviron & Masteron is that it's a useful tool for the TRT user and specifically for those that cruise on low "T" doses who wish to inhibit the conversion of T to estrogen. By inhibiting the aromatase enzyme, Masteron would be in effect blocking the conversion of free testosterone to estrogen by the aromatisation pathway Yielding great levels of Free usable test. This would not only serve to marginally increase the amounts of active free testosterone in circulation (thus giving a greater effect of the testosterone during a TRT treatment or cruise).. With this said, I was just using 200mgs Script test-cyp E7D (with script adex .5 E3D) and Masteron-200 E7D and proviron at 50mg ED this ultimately created a match made in heaven, a complimentary duo!

Bloods were pulled 3 days after last pin and I was fasted and the panel was a sensitive essay (I wanted to see if my BS levels would effect estrogen total serum by way of estrone elevation due to fasting).. I have BS issues along with a family history of diabetes, the serum levels were extremely high and I doubt there was cross-reactivity of anything else due to the fact that E2 was low.. Being in a fasted state seems to be the culprit..

Further more, people tend to put blood serum numbers in a standard range of expectancy.. I've always advocated that I'm a slow/low metabolizer, even at 200mg which is the high end of TRT treatment and I barely scraped the high end.. It proves that this truly is NOT a one size fits all..

My closing comments : Libido was great, appetite was strong and I have no complaints, my sense of well-being was on point..The extreme low SHBG levels IMO are directly associated with the mast/prov, thus the result of low estro and higher free T..This can explain why I continued to feel great even after lowering my T dosage significantly..

I will continually use Mast and/or Proviron with every cruise I do! 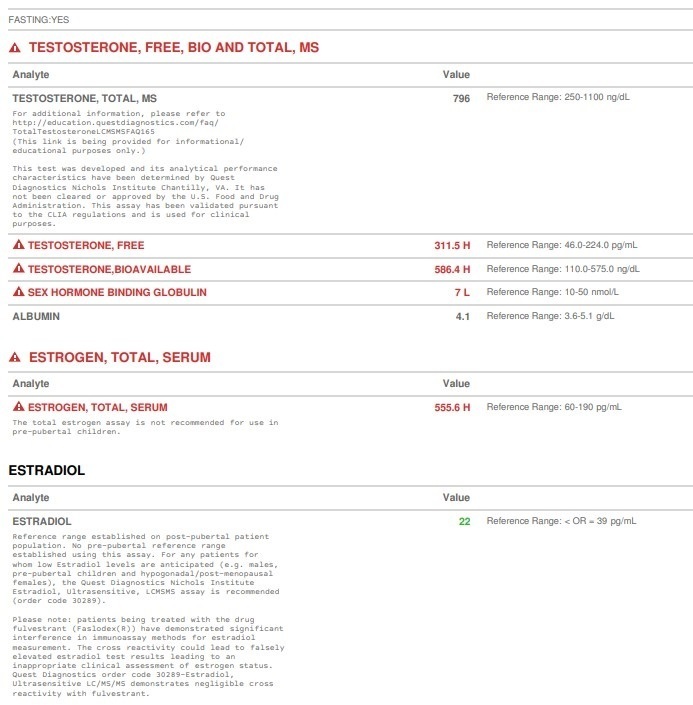 There's an Easter egg here that's hidden inside of all of this, it's something I don't want people to miss.

This goes to prove that you really don't need much test.. I laughed when I see guys chasing a total serum number, they are expecting numbers in or around the 3k + range and they believe that this is where you need to be in order to make the most progress.. I will say this again, stop chasing total serums and focus on free test levels.. people can have 3000 of bound test and that doesn't mean anything, in fact that testosterone is useless..

People should incorporate compounds that are complementary with freeing up bound testosterone into more bioavailable testosterone..

The moral of my point, is free up your test levels and let all of the other compounds be the workhorse..

Know how to optimize your testosterone levels so they can work best for you.. it's not quantity but rather qualities..
I would rather have several hundred work horses, compared to 3000 useless horses..

Is this shgb included on normal bloods trt docs run?