As part of a plea agreement, Mr. Fogle is expected to pay $100,000 in restitution to each of 14 minor victims, and to receive a sentence of at least five years.

Surrounded by attorneys and United States Marshals, Mr. Fogle arrived at an Indianapolis court on Wednesday morning, according to local news reports.

According to the documents, Mr. Fogle was charged with receiving and distributing sexually explicit images of minors and traveling across state lines to pay for sex with minors. A statement from the United States attorney’s office said that Josh Minkler, the federal prosecutor for Indiana’s Southern District, would publicly discuss the charges at a 12:30 press conference.

Wow. Just wow
A-Minds HYPE-SLAYER! All posts & feedback are guaranteed to be unsolicited and legit
"The fear of the LORD is the beginning of knowledge. Fools despise wisdom & instruction" Proverbs 1:7

He will get all the 6 inches he can handle now. Hell maybe even a few footlongs.

cubsfan815 said:
He will get all the 6 inches he can handle now. Hell maybe even a few footlongs.
Click to expand...

Maybe Sandusky can give him a helping hand? 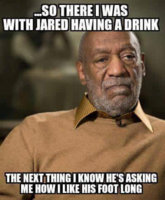