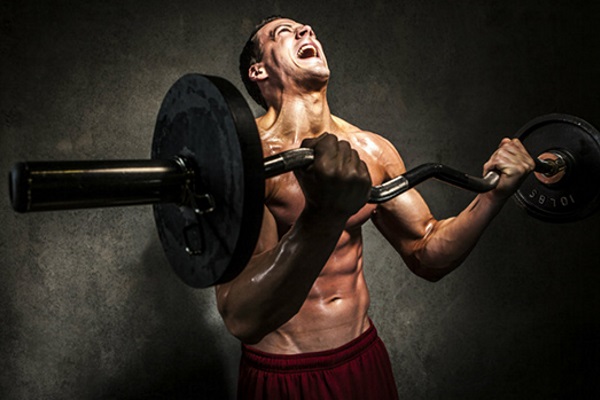 Do It Right and Double Your Rate of Biceps Growth

Here’s what you need to know…

Do You Need More Compound Movements?
Some experts argue that small biceps are the result of not doing enough big compound movements. I disagree. I know a ton of athletes (hockey players, Olympic lifters, some powerlifters, etc.) who don’t have great biceps despite doing all the compound movements you can think of.

Do You Just Need More Overall Bodyweight?
Many coaches say that those who can’t make their biceps grow are simply not gaining enough overall weight. While it’s true that adding overall muscle mass will help add size to your arms, it’s not true that you need to add a lot of overall size to increase the size of your biceps. Just look at pro arm wrestlers who have much bigger arms than the rest of their bodies. Plus, there are plenty of small fellas out there with pretty darn good arms. You can indeed increase the size of your arms without adding muscle elsewhere.

The Real Reason Your Biceps Won’t Grow
The main reason why people are having trouble putting size on their biceps is simple: they don’t really know how to curl. As a result, they’re just not good at fully stimulating their biceps. The curling action is fairly simple, but some small details can make a huge difference in how effective the movement will be.

The Difference Between An Efficient and Inefficient Curl:

Your Body Position is Wrong
The position of your body when performing an exercise is important. Even during a “small” movement like curls, using a proper body position can totally change muscle recruitment. Without even knowing it, the first mistake almost everyone makes is tensing their traps. Their shoulders go slightly up and forward before they even start the curling motion.

There are a dozen studies showing that tensing a muscle prior to initiating a movement increases the activation of that muscle. So what happens when you set up with your traps tensed and shoulders slightly forward and up? You naturally tend to use your front delts and traps to do the curl. Sure, your biceps will get some stimulus, but during the first half of the movement they won’t receive the stimulation they should be getting.

The same people who are tensing their traps and lifting their shoulders up at the beginning of the movement also tend to lean forward just prior to initiating the curl. Instinctively, they do this to leverage the weight up to take advantage of the fact that the traps and front delts are ready for action. Again, this reduces the loading of the biceps when they’re in their most stretched position, which is the most important position to load to maximize growth.

The Optimal Starting Position for the Curl
This posture will put you in the best possible starting position to place as much of the load on the biceps as possible.

From Bad Setup to Good Setup:

First, you want to tense/flex your triceps to get into the proper starting position. Flexing your triceps will allow you to fully straighten your arms in the starting position. This means that you’ll have a slightly longer range of motion to load the biceps. It might only be an inch more, but over time this is enough of an increase in stimulation to make a difference. Remember, the muscle being stretched the most is the muscle being recruited the most. By using the triceps to stretch the biceps you’ll increase biceps recruitment.

Second, tense your abs. Imagine you’re about to get punched in the stomach. Tense your glutes as well and try to “grab” the floor with your toes. All that rigidity creates a super stable base from which to curl. The body thrives on stability. The more stable your body feels, the more it will allow you to recruit the prime movers you want to hit.

Now that you’re all set to curl it’s time to pre-load the biceps. Just prior to bending your arms, tense your biceps – the strongest isometric contraction you can. As soon as you reach that high level of tension you begin to curl, paying attention to maintaining the same posture and rigidity.

How to Curl the Weight Up
Now the weight is moving. How should you perform the concentric or lifting motion for maximum results? Understand that the body will really want to compensate with other muscles to do the job, so you must actively contract the biceps as hard as possible during the whole lift. Imagine that you aren’t lifting a weight, but rather flexing your biceps while moving, voluntarily try to make your biceps as hard as possible during every inch of the rep.

The Forgotten Part of the Biceps Curl
For a long time I used a shortened range of motion when curling. I believed that it was important to keep the biceps under constant tension and so I avoided going all the way up. Then Paul Carter convinced me to try adding the last portion of the curl: the shoulder flexion. When the arm is fully flexed you finish up by rotating the shoulders up, which will bring the elbow high.

The bicep has three main functions: arm flexion (the curl), forearm supination (which is why I prefer a straight bar) and shoulder flexion (rotating the shoulder up, lifting the arm up). So finishing the curl with a shoulder flexion makes sense.

How to Lower the Weight Down
Many people miss the boat completely when it comes to lowering the weight – the eccentric portion of the exercise. First, the eccentric part of a lift can really help you build more muscle mass. Not so much because of an increase in muscle damage, but rather because of greater mTor activation which leads to higher protein synthesis.

When lowering the weight, people tend to relax the biceps and let the weight down by using more front deltoids and traps. Instead, they should first rotate the shoulder down (because they did the shoulder flexion/rotating up to do the full range). Once the upper arm is perpendicular to the floor (elbow pointing straight down) you block the shoulder and only extend down at the elbow joint. Do not make it easier on yourself!

Lower the rep exactly like you initiated the first rep: flexing the triceps to fully straighten out your arm. Then you make sure that you’re rigid and immediately tense your biceps before initiating the next rep.

Does It Have To Be So Complicated?
Sure, at first it’ll take some effort to get used to doing all this. And your performance might suffer at first since you can’t compensate with other muscles. But it won’t take long before it becomes automatic and you’ll begin to get biceps growth as if it were the first time you trained them. In a way, it will be.

Treat the curl like any other exercise and attack it with the same level of focus and dedication. There should be no “let’s get this over with” exercises. If you see exercise like that in your plan, drop it.