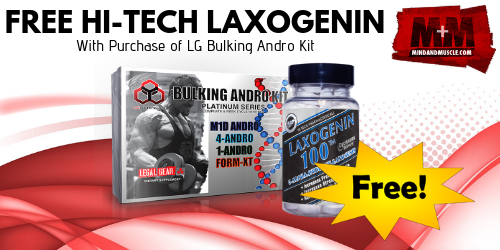 Nootropics are often talked about in Silicon Valley — but can they help Strength Athletes Gain an Edge?

These compounds are typically associated with hard-charging CEOs looking to get an edge on the competition, students cramming for a midterm, or elite biohacker seeking to promote healthy aging and combat cognitive decline. And while it’s true that nootropics can and do benefit these groups, there’s another segment of the population that should be reaping the benefits of nootropics, but rarely seek to employ them — the hard-training athlete.

Athletes subject their bodies to a multitude of mental, physical, and psychological stresses on a daily basis. Left unchecked, these stresses can torpedo performance and severe limit muscle and strength building.

That’s where nootropics come in.

In addition to enhancing your mental alertness and concentration during training, they provide a number of benefits that will be particularly useful for the extreme athlete. Let’s take a look now at how nootropics can benefit athletes (regardless of sport) and see why you should be adding them to your pre workout and post workout.

Benefits of Nootropics for Athletes

If you’ve ever taken a pre workout or energy drink, you’ve witnessed the energy boosting effects of nootropics, namely in the form of caffeine. While caffeine is a strong central nervous system stimulant, it’s also the most widely consumed nootropic on the planet, with volumes of research demonstrating its ability to improve cognition and alertness all while reducing mental and physical fatigue.

Caffeine isn’t the only nootropic for greater energy. Other proven energy enhancers include Sulbutiamine (a form of Vitamin B1) and TeaCrine, both of which can be found in nootropics like AZOTH. Together these compounds increase your mental and physical energy levels[1,2] allowing you to push your body farther in training or competition, enabling you to get those crucial extra gains that help ensure victory.

Focus isn’t only necessary to do well in the classroom or the boardroom, it’s also an essential component of every top-tier athlete, regardless of what sport. Focus is what enables you to stay locked in during training, ensuring you’re making the most of your time spent in the weight room. It’s also essential on the field of competition, where dazing off for even a millisecond can make the difference between you making the play and you dropping the ball.

Focus is most vital perhaps to non-team sports, such as bodybuilding, where there is no one else to push you. It’s you and the iron. Your success is ultimately determined by your ability to get in the gym and crush it each and every day regardless of what else is going on in the world.

Focus is that key element that separates champions from the rest. No matter how genetically gifted an individual may be, if they lack the ability to focus on their training, they will never claim the crown.

If you find yourself lacking in focus, nootropics are one of the first places you should turn. In fact, nootropics specialize in boosting focus. Nootropics such as phosphatidylserine, Alpha GPC, and the much beloved caffeine + theanine combo are stellar options for bolstering focus[3,4] and helping you stay on target whether training or competing.

Hitting the gym day in and day out can be incredibly draining, both physically and mentally. Some days, you just don’t feel like going lift a bunch of heavy weights. Keep in mind, that’s not taking into account what happens during the rest of your day, which is equally draining (and possibly more so) on your mental faculties.

Add it all together and you have the perfect recipe for reduced motivation, desire, and drive to train. Fortunately, nootropics can help the avid lifter struggling to combat the mental and physical fatigue he or she feels on a daily basis. Ingredients such as bacopa monnieri, ashwagandha, choline, rhodiola rosea, and sulbutiamine all help alleviate mental fatigue[5,6,7] and restore clarity of mind, enhancing your focus and motivation so you can keep setting those PRs in the weight room.

To build muscle and strength, maximizing your anabolic hormones (testosterone, IGF-1, growth hormone) is a must. Without sufficient levels of these muscle-building hormones, you’ll never realize your true potential for size and strength.

Now, some lifters will be quick to resort to less ‘natural” means to enhancing their hormone levels, which often come with horrendous side effects, including gynecomastia (“man boobs”) and liver damage. Rather than immediately jump into the world of designer anabolics, why not try a few of the natural means to improving testosterone, namely a nootropic called ashwagandha.

Ashwagandha is an age old adaptogen that’s recently been shown to increase testosterone levels, improve thyroid functions, and boost sperm count.[8,9,10] It’s also been shown to improve muscular strength and recovery. Basically, if you’re crushing it in the gym each and every day, you should make ashwagandha one of the first supplements you get when looking to improve performance, recovery, and growth.

Intense exercise & dieting are a natural part of training and competing. So is the use of stimulants, which are typically used either in a pre workout to enhance performance or in a fat burner to suppress appetite and enhance lipolysis. However, what these three things having in common is that they all increase cortisol levels, which puts a severe strain on your adrenal glands and torpedoes your muscle-building and recovery efforts.

Cortisol is the body’s primary stress hormone that’s released in times of panic or danger (i.e. getting chased by a tiger). While cortisol can be beneficial in small doses, the daily stresses of training, work, stimulant use, and dieting can lead to chronically elevated levels of cortisol which not only reduces performance and muscle growth, but also hampers testosterone production.

Nootropics are a godsend when it comes to reducing stress, cortisol, and even anxiety. Some of the best nootropics for combating cortisol are ashwagandha and Phosphatidylserine, which have been shown time and again in research trials to effectively reduce cortisol and improve the way your body deals with all manner of stress.[11,12] By maintaining a healthy cortisol response, you’ll have better performance in training, enhanced recovery, and improve muscle growth and strength gains.

Human potential is the worlds greatest paradox, everyone has it yet only a few get to experience it – Dreams Lost, Goals Abandoned, and Potential Wasted… NOW is your time for change – @gmcclure25 is leading the battle in destroying mediocrity and maximizing human potential – Join The AZOTH Tribe, level up your life and wake your dreams into realities – The clock is ticking, what will your life become? – #azothtribe5to5

If for no other reason that nootropics should be included in every athlete’s training stack, consider this — they actually improve performance.

Alpha GPC in particular has been shown to be a valuable performance-enhancing compound. Studies have shown that this highly bioavailable form of choline enhances peak force production during resistance training as well as strength.[12,13] Additionally, Alpha GPC has also been noted to improve reaction time, another essential component to optimal performance in athletics.[14]

Better performance, endurance, and stamina while training translates to more work accomplished in your training sessions which ultimately means more muscle growth, something any athlete will gladly take. Bigger, stronger muscles translates to better performance no matter if it’s on a football field, outdoor track, or bodybuilding stage, and nootropics can be extremely helpful in your pursuit of athletic excellence.

Nootropics — A Must for Athletes

Don’t make the mistake of brushing aside nootropics as a “nerd” supplement. This brain-boosting compounds are great for the office worker and student, but they’re also incredibly beneficial for the linebacker, swimmer, or bodybuilder looking to take their performance in the gym and on the field to the next level. If you haven’t dabbled in the world of nootropics, except for the caffeine in your pre workout, consider giving them a try and witness the power of nootropics for athletic performance.