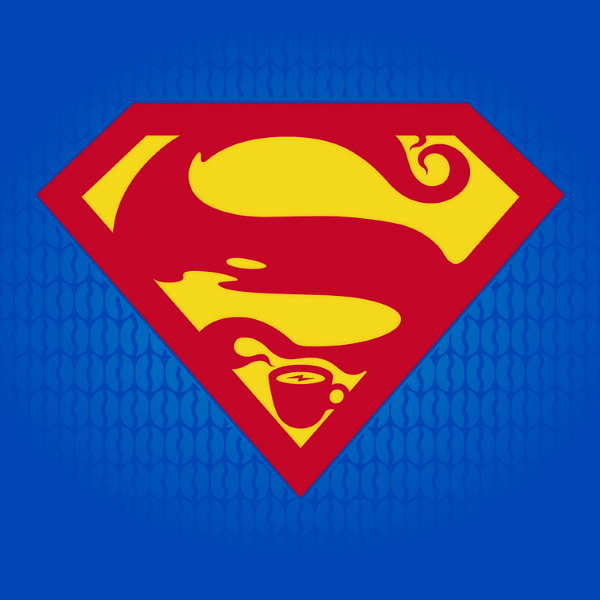 It has been some week since I have written the last coffee article. Today, the coffee-free time ends, though. Scientists from the Kao Corporation in Japan have recently developed what I labeled a “high octane” coffee… and no, that’s not a brand/blend that’s particularly high in caffeine. That wouldn’t be #SuppVersity news-worthy.

What is it then, if it’s not coffee that bumps up the postprandial fat oxidation?

At face value, the answer seems to be straightforward; it’s an old acquaintance and – at least for supplement junkies – probably the #2 on the list of “I know that stuff”-ingredients in coffee: chlorogenic acid – I’ve discussed its effects and how to maximize its content in coffee in all detail in my coffee buying, roasting, brewing 101 (btw. if you haven’t listened to me explaining it on Ben Greenfield’s podcast, do you here).

While its effects on fat oxidation have received public attention when Dr. Oz reported on the results of a meanwhile retracted study, in which the researchers claimed to have observed quite extraordinary weight loss results with nothing but a high chlorogenic green coffee bean extract, it is not, as you would assume if it was on Dr. Oz, as useless as raspberry ketones another Oz-zy favorite.

Not as useless as raspberry ketones, but…

In spite of the fact that the previously cited study has been retracted, there’s ample evidence from rodent studies, that chlorogenic acids (CGAs) reduce blood pressure and body fat, and enhance fat metabolism.

Table 1: The previously reported improvements in glucose and fatty acid metabolism in response to CGA were not augmented when the HHQ was removed. The set of markers the scientists tested under fasting conditions were identical. At least for triglycerides (TG) and non-esterified fatty acids (NEFA), glucose and insulin I’d yet like to see postprandial data, as well… this data is not available, though, and I am not sure if Katada et al. didn’t measure or just didn’t report it.

One hitherto overlooked problem with the CGA from your morning coffee I’ve also discussed in the previously referenced 101 article, is its oxidation during the roasting process coffee, which gives right to its oxidant component hydroxyhydroquinone (HHQ).

Bummers: The scientists fail to report if their subjects were habitual coffee consumers. The scientists did not analyze (or didn’t publish the data) the std. markers of glucose and fatty acid metabolism from Table 1 in the postprandial state. They were advised, though, to “avoid excessive intake of coffee other than the test beverage, foods that contain a high amount of CGA (e.g., eggplant, potatoes), and foods that contain a high amount of polyphenols” (Katada 2018).

What we do know, already, is that HHQ counteracts the antihypertensive (=blood pressure lowering effects of CGA | Yamaguchi 2008), as Katada et al. (2018) highlight in their latest paper, it is yet likely that it will also diminish CGA-induced fat oxidation (FOX). Accordingly, the scientists tested the effects of CGA-enriched and HHQ-reduced coffee on FOX in a crossover study (4-week washout) on fifteen healthy male volunteers (age: 38 ± 8 years (mean ± SD); BMI: 22.4 ± 1.5 kg/m²). The study did, however, not, as you probably expected, measure the acute response to a HHQ-reduced coffee, but had the subjects consume “the test beverage (coffee) containing the same amount of CGA with HHQ (CGA-HHQ(+) | 428 mg/128ml CGA, 570 mcg/128 ml HHQ) or without HHQ (CGA-HHQ(−) | 382 mg/128ml CGA, 80 mct/128ml HHQ – that’s a relative reduction of 85%) for four weeks” (Katada 2018) – and yes, that’s just one cup of coffee.

So, if it works, how potent is the effect?

To get an idea of both, the effect size and the potentially underlying mechanism that would trigger the reduction in postprandial FOX the authors hypothesized they’d observe, they measured FOX, as well as the ratio of the biological antioxidant potential (BAP) to the derivatives of reactive oxygen metabolites (d-ROMs) as an indicator of oxidative stress.
Practical advice to save money: Buy lightly roasted coffee. As you’ve learned in the coffee buying, roasting, grinding, brewing 101 it will have naturally high CGA and naturally low HHQ levels, anyway… and let’s be honest: in view of the fact that even this special coffee preparation won’t burn body fat, you probably won’t be missing out if skip the extra expenses | learn more

Figure 1: Effects of 4 weeks on “high octane” coffee (orange) vs. regular coffee (blue) on the average antioxidant status and fatty oxidation rate in the initial 300 min after a test meal in 15 male, healthy volunteers (Katada 2018).

In that, the scientists speculate (IMHO for a good reason) that “the mechanism underlying the inhibition of FOX by HHQ is related to postprandial oxidative stress” (Katada 2018). What they don’t mention explicitly is that the practical relevance of the observed effects is… well, at least questionable. As highlighted in the light-blue “practical advice”-box, it is furthermore not unlikely that you would see similar health-improving effects by simply choosing a lighter roast. After all, you’ve learned in the SuppVersity 101 on coffee buying, roasting, grinding, brewing that the degree of roasting is the main determinant of the CGA content of coffee – what I didn’t explicitly mention in that article, though, is that darker roasts will also have increased levels of HHQ. 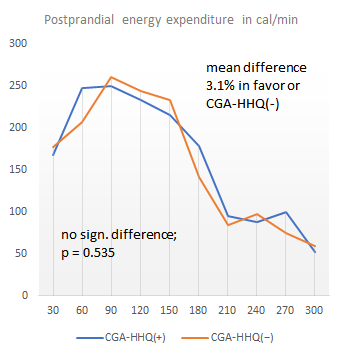 Figure 2: The one parameter that would matter when it comes to weight loss, i.e. the post-prandial increase in energy expenditure is not significantly different for the low HHQ coffee (CGA-HHQ(-)) – data based on Katada 2018.

That is an interesting observation, but is it also relevant? If that’s what you’ve been thinking even before you’ve read the question in this bottom-line this is probably not your first visit here at the SuppVersity. Yeah, you’re right: a mere increase in fat oxidation and even measurable and statistically significant improvements in the antioxidant status of the subjects is not necessary physiologically relevant.

And while it is very difficult to quantify the long-term effects of lower post-prandial stress, it stands out of question that, in view of the role of increased oxidative stress in the development of the metabolic syndrome, the highly significant reduction of a proven and often-used indicator of oxidative stress (learn more about the BAP/d-ROMs ratio) the scientists observed after 4 weeks ‘on’ their “High Octance” vs. regular coffee could add to the benefits of other dietary and behavioral strategies to reduce oxidative stress and thus indeed help you prevent or even combat metabolic syndrome.

What you must not expect, though is that switching to an, as of yet unavailable, “high octane” (=HHQ reduced coffee) will get you jacked in no time. Why? Well, the increase in fat oxidation is mediocre and – as every SuppVersity reader will know: the amount of fat you burn is in no way directly related to the amount of body fat you lose – eventually it will all come back to energy in vs. energy out and that’s where the study found no significant difference (see Figure 2).

Now that doesn’t mean that potentially glycogen- and protein-sparing effects of an increased mobilization and oxidation of fatty acids were not conducive to weight, or I should say fat loss; weight loss wonders as in the retracted CGA study, however, cannot be expected | Comment!