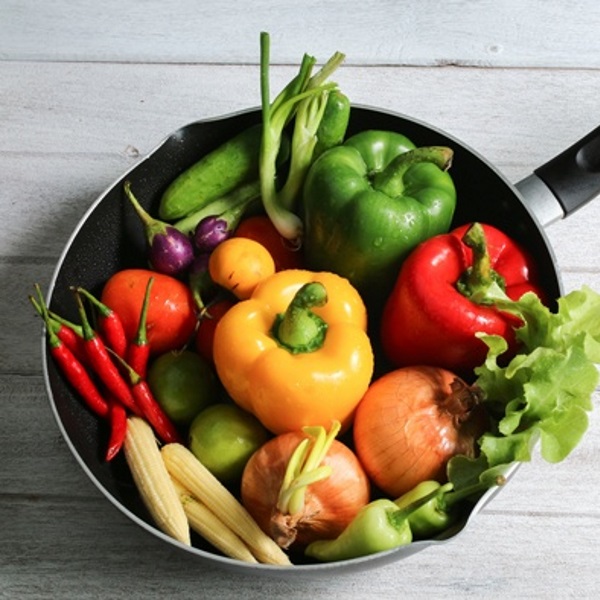 Cooking food can improve its taste, but it also changes the nutritional content.

Interestingly, some vitamins are lost when food is cooked, while others become more available for your body to use.

Some claim that eating primarily raw foods is the path to better health. However, certain cooked foods have clear nutritional benefits.

This article discusses the benefits of both raw and cooked foods.

What Is a Raw-Food Diet?

Raw foods are foods that have not been cooked or processed.

While there are varying levels of raw-food diets, all of them involve eating mostly unheated, uncooked and unprocessed foods. In general, a raw-food diet is made up of at least 70% raw foods.

Advocates claim that raw foods are more nutritious than cooked foods because enzymes, along with some nutrients, are destroyed in the cooking process. Some believe that cooked food is actually toxic.

While there are some clear benefits to eating raw fruits and vegetables, there are also some potential problems with a raw-food diet.

A strict raw-food diet is very difficult to follow, and the number of people that stick to a completely raw diet in the long term is very small.

Furthermore, some foods contain dangerous bacteria and microorganisms that are only eliminated by cooking. Eating a completely raw diet that includes fish and meat comes with a risk of developing a food-borne illness.

Cooking May Destroy Enzymes in Food

When you consume a food, digestive enzymes in your body help break it down into molecules that can be absorbed (1).

The food you eat also contains enzymes that aid digestion.

Enzymes are heat sensitive and deactivate easily when exposed to high temperatures. In fact, nearly all enzymes are deactivated at temperatures over 117°F (47°C) (2, 3).

This is one of the primary arguments in favor of raw-food diets. When a food’s enzymes are altered during the cooking process, more enzymes are required from your body to digest it.

Proponents of raw-food diets claim that this puts stress on your body and can lead to enzyme deficiency. However, there are no scientific studies to support this claim.

Some scientists argue that the main purpose of food enzymes is to nourish the growth of the plant — not to help humans digest them.

Furthermore, the human body produces the enzymes necessary to digest food. And the body absorbs and re-secretes some enzymes, making it unlikely that digesting food will lead to an enzyme deficiency (4, 5).

Moreover, science has not yet demonstrated any adverse health effects of eating cooked foods with denatured enzymes.

Summary: Cooking foods deactivates the enzymes found in them. However, there is no evidence that food enzymes contribute to better health.

Some Water-Soluble Vitamins Are Lost in the Cooking Process

Raw foods may be richer in certain nutrients than cooked foods.

Some nutrients are easily deactivated or can leach out of food during the cooking process. Water-soluble vitamins, such as vitamin C and the B vitamins, are particularly susceptible to being lost during cooking (6, 7, 8, 9, 10).

Some minerals and vitamin A are also lost during cooking, although to a lesser extent. Fat-soluble vitamins D, E and K are mostly unaffected by cooking.

Boiling results in the greatest loss of nutrients, while other cooking methods more effectively preserve the nutrient content of food.

Steaming, roasting and stir-frying are some of the best methods of cooking vegetables when it comes to retaining nutrients (12, 13, 14, 15).

Lastly, the length of time that a food is exposed to heat affects its nutrient content. The longer a food is cooked, the greater the loss of nutrients (9).

Summary: Some nutrients, particularly water-soluble vitamins, are lost during the cooking process. Raw fruits and vegetables may contain more nutrients like vitamin C and B vitamins.

Cooked Food May Be Easier to Chew and Digest

Chewing is an important first step in the digestive process. The act of chewing breaks down large pieces of food into small particles that can be digested.

Improperly chewed food is much more difficult for the body to digest and can lead to gas and bloating. Additionally, it requires significantly more energy and effort to properly chew raw foods than cooked ones (16).

The process of cooking food breaks down some of its fibers and plant cell walls, making it easier for the body to digest and absorb the nutrients (17).

Cooking also generally improves the taste and aroma of food, which makes it much more enjoyable to eat.

Although the number of raw foodists who consume raw meat is small, meat is easier to chew and digest when it’s cooked (18).

Properly cooking grains and legumes not only improves their digestibility, but it also reduces the number of anti-nutrients they contain. Anti-nutrients are compounds that inhibit the body’s ability to absorb nutrients in plant foods.

The digestibility of a food is important because your body can only receive a food’s health benefits if it’s able to absorb the nutrients.

Some cooked foods may provide the body with more nutrients than their raw counterparts because they are easier to chew and digest.

Summary: Cooked foods are easier to chew and digest than raw foods. Proper digestion is necessary to absorb a food’s nutrients.

Cooking Increases the Antioxidant Capacity of Some Vegetables

Studies have shown that cooking vegetables increases the availability of antioxidants like beta-carotene and lutein (19, 20).

Beta-carotene is a powerful antioxidant that the body converts into vitamin A.

A diet rich in beta-carotene has been associated with a reduced risk of heart disease (21).

The antioxidant lycopene is also more easily absorbed by your body when you get it from cooked foods instead of raw foods (22).

Lycopene has been associated with a decreased risk of prostate cancer in men and lower risk of heart disease (23, 24).

One study found that cooking tomatoes reduced their vitamin C content by 29%, while their lycopene content more than doubled within 30 minutes of cooking. Also, the total antioxidant capacity of the tomatoes increased by over 60% (22).

Another study found that cooking increases the antioxidant capacity and content of plant compounds found in carrots, broccoli and zucchini (25).

Antioxidants are important because they protect the body from harmful molecules called free radicals. A diet rich in antioxidants is associated with a lower risk of chronic disease (26).

Summary: Cooking your vegetables may make certain antioxidants more available to your body than they are in raw foods.

However, fruits and vegetables are generally safe to consume raw, as long as they have not been contaminated.

Spinach, lettuce, tomatoes and raw sprouts are some of the fruits and vegetables most frequently contaminated by bacteria (28).

E. coli, Salmonella, Listeria and Campylobacter are some of the most common bacteria that may be found in raw foods (30).

Most bacteria cannot survive at temperatures over 140°F (60°C). This means that cooking effectively kills bacteria and reduces the risk of food-borne illness (31).

Commercially produced milk is pasteurized, which means it has been exposed to heat to kill any harmful bacteria it may contain (32).

It is not recommended to consume raw or undercooked meat, eggs or dairy. If you do choose to eat these foods raw, make sure your food is fresh and purchase it from a trusted source (31).

Summary: Cooking food effectively kills bacteria that may cause food-borne illnesses. This applies especially to meat, eggs and dairy.

It May Depend on the Food

Neither a completely raw nor completely cooked diet can be justified by science.

That’s because both raw and cooked fruits and vegetables have various health benefits, including a lower risk of chronic disease (33).

The truth is that whether food should be consumed raw or cooked may depend on the food.

Here are a few examples of foods that are either healthier raw or healthier cooked:

Foods That Are Healthier Raw

Foods That Are Healthier Cooked

Summary: Some foods are better to eat raw, and some are healthier when cooked. Eat a combination of cooked and raw foods for maximum health benefits.

However, it’s unnecessary to follow a completely raw diet for good health.

For the most health benefits, eat a variety of nutritious raw and cooked foods.