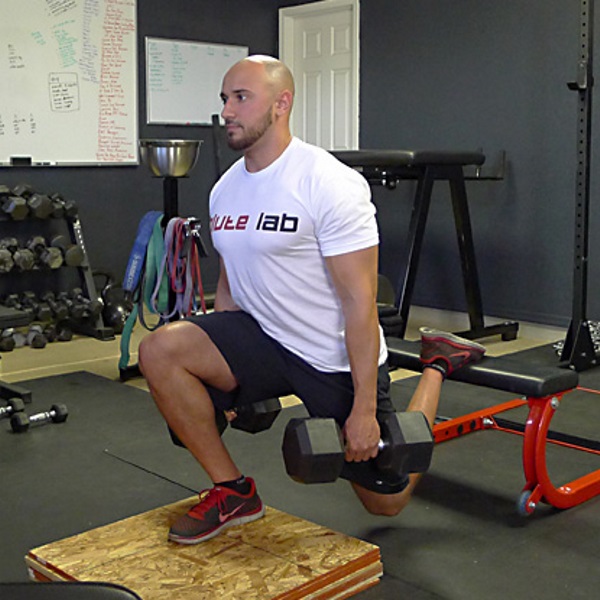 The general belief is that multi-joint (as opposed to isolation) exercises are the better choice for overall improvements in strength and power. It’s why exercises like push ups, pull ups, and squats are staples of nearly every exercise program in the world.

The theory goes that multi-joint movements tend to recruit both sides of the body (right and left arm, right and left leg, etc.), which means greater muscular engagement, and therefore higher overall force production. If your goal is greater overall fitness in a short workout time, it’s always better to stick with these bilateral exercises that work both sides of the body.

At the same time, unilateral exercises, which work one side of the body at a time, also have their place in your workout program. The effects of these unilateral exercises are very different than bilateral movements. They may not be as efficient overall in terms of total observed power output, but they do yield exclusive benefits that will help improve your athleticism that should not be neglected.

It is important to note that athleticism is a concept that encompasses not just power, strength, and speed, but also agility. Unilateral (single-leg, single-arm) training will make you more athletic because of the recruitment patterns and mechanisms at play.

Unilateral vs. Bilateral Training: The Research

There are studies that show unilateral and bilateral training lead to similar effects in terms of strength, sprint speed, and change of direction speed. For example, 18 rugby players spent 5 weeks training their legs with either single-leg or both-leg squats.1 Both groups saw similar improvements in their agility, strength, and coordination. While differences may not be significantly apparent across a group, injury risk, field performance, and the normalization of data are very difficult to account for.

That last bit right there is one of the primary reasons to engage in unilateral training. There are dozens of studies that prove bilateral exercises are better for fitness overall—I won’t argue that. Instead, I firmly believe that unilateral exercises lead to improvements in the smaller muscle groups.

As every expert will tell you, you have to focus on every area of your game. Think about what would happen if you only performed bench presses. You’d develop strong arms, chest muscles, and shoulders, but what about your back, abs, and legs? Those muscles would be largely ignored, and thus underdeveloped. How might his affect your play, and your ability to perform?

The same is true with bilateral and unilateral movements. When you perform a lot of bilateral exercises (like squats), you develop bilateral strength. That means your legs are strong when they work together. There will be improvements in unilateral strength (each leg on their own), but the strength is only significant when both legs are engaged.

Be warned: your unilateral strength is not 50% of your bilateral strength. You may be able to squat 600 pounds, but it’s very unlikely you’ll be able to single-leg squat 300 pounds. This is one of the cases where the whole (force generated) is greater than the sum of both parts.

Another great benefit of unilateral training is that it can help to correct musculoskeletal defects. Most fitness trainees and athletes develop injuries or deficits on one side of their bodies (one knee, one shoulder, one hip, etc.). Sports place a greater strain on one side of the body due to the use of the dominant hand or leg to kick, throw, run, or jump. The regular use of the dominant side can lead to greater development of strength on that side, as well as a higher risk of injury or strain.

Unilateral training can help to correct for that use. Not only will single-arm or single-leg training increase the strength on the weak side, but it can correct the posture and form of the dominant side. Equal strengthening on both sides of the body can lead to better bilateral force generation.

Put simply, training one limb, or one side of the body at a time, creates a hugely advantageous scenario leading to increases in proprioception, balance, motor recruitment, firing patterns, muscle activation and efficiency.

At the very highest levels of athleticism, there are many great examples where the necessity to include unilateral training into any well-built training program becomes painfully obvious. Take an elite sprinter, and picture steps 1, 2, and 3 out of the blocks. Imagine the colossal amount of force being generated in this situation. For the majority of this phase, the entire force production is through a single leg in contact with the athletics track.

THERE IS A DISTINCT ADVANTAGE TO BE HAD BY THE ATHLETE THAT PAYS ATTENTION TO SINGLE LEG STRENGTH AND POWER EXERCISES, OVER THE ONE WHO DOES NOT.

The correct recruitment of the smaller muscle groups is typically much greater in single leg movements, compared to its dual-legged counterpart. The development of these smaller muscles, taxed during unilateral exercises, allows greater overall force production in sport-specific movements. These same smaller muscle groups also provide a huge amount of stability. As the body learns to activate the muscles in this way, it becomes more efficient at producing large forces, and adapts to stabilize the body under unilateral forces.

If you want to be truly athletic, it’s smart to bring unilateral training into your regular program. Keep bilateral exercises, as they certainly have their place as the foundations, but mix a few unilateral movements into the program as well. You’ll improve each arm and leg independently, leading to better efficiencies, stability, strength, and agility where it counts: on the field.