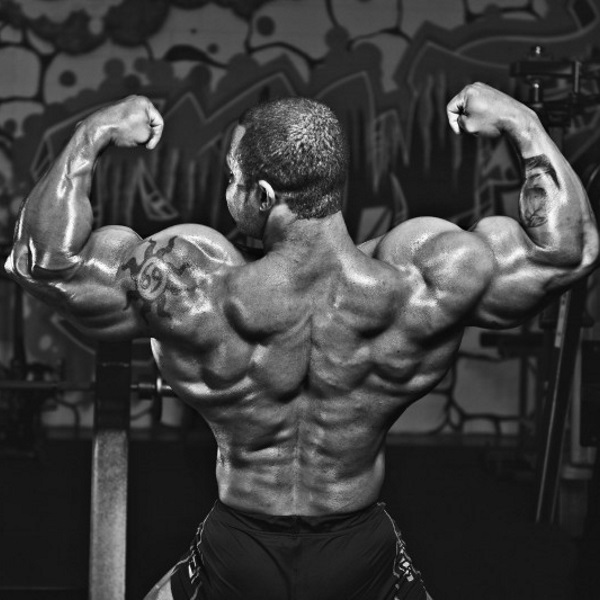 Beware this training complex will increase your muscle size and help to push your strength levels through the roof. Anyone wanting the skinny aerobics instructor body —this routine is not for you.

Building rock solid shoulders with excellent functional strength requires the correct strategies and gritty effort. Adding slabs of muscle to the shoulder width creates a muscular appearance and makes the waist look visually more compact. This is commonly referred to as the V-taper. Paying proper attention to all three shoulder muscle heads to support proper balance is crucial for injury prevention and optimal performance. Many trainees neglect the posterior shoulder head which will catch up to them sooner rather than later.

After blasting our triceps and biceps we executed a highly dense complex of three shoulder exercises. We crushed a W Shoulder Press, seated dumbbell shoulder press, and bent over high position shoulder raise with only ten seconds rest between movements. The W Shoulder Press is much harder than it looks and creates a great deal of pre fatigue before the traditional shoulder press. As a result the load used for the shoulder press is less than usual, which can allow trainees to focus on proper form while gaining maximal benefits from every rep. Reduced shoulder press loading can also lessen stress on the joints. By the time we reached the bent over shoulder raises we were dripping with sweat, but far from done.

Stimulating muscle growth starts with “damaging” muscle fibers so they will regrow to be larger during the recovery process. The muscle recovery process starts immediately following the set with nutrients available in the blood stream. So the question becomes how to stimulate more fibers during training sessions to support our goals. Ten seconds rest following the W Press to the shoulder press allows fewer muscle fibers to recover between sets in comparison to a 60-second rest period. As a result, the shoulder press can “damage” a different portion of muscles fibers than usual. Another 10-second break before the bent over shoulder raise creates more muscle fiber exposure during this final phase of the three movement complex.

Ten second rest periods will certainly test your willpower. Your muscles will tell you to quit, but you can push beyond some burning sensations with proper form to get the most out of every set.

One of our objectives was to accelerate muscle growth by stimulating a wide cross section of muscle fibers. The W Press presents a fresh stimulus since we had not used that particular movement in a while. This unique exercise requires precise technique and mental focus to get the most out of every rep. We performed three sets total of the three movement shoulder complexes with about 90 second rest in between cycles. The short rest periods drive up lactic acid levels which are a precursor to the all-powerful fat burning hormone: Growth Hormone.

Keeping training sessions under 50-60 minutes is very important for minimizing a catabolic response from training which can result in muscle wasting and increased belly fat deposition from elevated stress hormones. Attaching this 12-minute shoulder complex to the front end of a training session will be ideal to support the best execution. Short rest periods help to keep overall session length well under and hour by improving training density factors.

Take a very close look at Dr. Eric Serrano’s form corrections while Scott Mendelson performs the shoulder complex. Dr. Serrano manipulates Scott’s arm position to be farther back during the W press to gain optimal range of motion. Maintaining an externally rotated position during the W and traditional shoulder press movements is very important. A tough chest and back training session on Thursday left our upper body tighter than usual which requires a smarter approach to dynamic stretching before subsequent training sessions.

Do Not Be Afraid to Start with Small Weight Loads

Picking the right weight load starts with warm-up sets. Start low and build up gradually while concentrating on proper form. Yes, we used what appear to be wimpy 15 pound dumbbells for 8 controlled reps of the W Press, but that load was appropriate given the extended eccentric (lowering phase) for each rep. Fifty pound dumbbells were just right for the traditional shoulder press, especially with the two-second pause on bottom. Finally, 10 pounds crushed us on the Bent Over High Position Shoulder Raise, but that is perfectly fine at this stage.

The W Press is not designed to handle a high training load. We suggest starting with five pound dumbbells during a warm-up sequence and do not move up in load until mastering the proper form. Some trainees with shoulder pain may not be able to perform the W Press properly until they have corrected underlying problems.

The sheer difficulty of the movement when performed correctly limits the loading naturally. Extending the length of the eccentric (lowering phase) adds strategic challenge, but also helps with form execution.

We cannot claim that this training strategy will prevent all injuries, but it is a step in the right direction. Balancing the shoulders by training all three heads of the muscle productively is very important. Those who have been shoulder pressing on a regular basis for years should consider less pressing and concentrating on the rear deltoid which is commonly under developed due to neglect.

You will blast the supraspinatus and lateral head of the shoulder with this movement. Stay focused on the proper starting and finishing points for each rep. Prioritize the proper form over the weight load and use a controlled tempo with no less than a three-second lowering phase to reduce shearing forces on the joint. Retract and depress the scapula before starting the set and maintain this position throughout.

Keep a five-degree elbow bend throughout the entire rep to avoid cheating yourself out of benefits. The elbows will come in contact with the lats on the bottom of the movement to indicate the stopping point. Raise the load using a circular motion which should take one or two seconds to reach the top. Smashing the dumbbells together on top of the rep to hear the satisfying clanging sound is not a good idea. A training partner to support proper form, range of motion completion and to provide feedback during the set is very helpful.

Prioritize a proper range of motion by touching the dumbbell to the shoulder in the bottom position and achieve a complete stop for one to two seconds. Maintain an externally rotated position during the entire rep. This movement will train the anterior deltoid (front) and medial deltoid (middle).

The lower part of the dumbbell should be even with ear. This technique will be more challenging than other positions, but remember the objective is to target the rear deltoid, not to handle the most arbitrary weight load. Fight the temptation to swing the weights up, as this reduces the training benefits. A similar movement can be executed while face down on a 30 degree bench which is the right move when struggling during the bent over position.

Raise the dumbbells to a high position on top of the rep which should be three to four inches higher than the head. It is easy to lose this distance as fatigue sets in. A training partner can help to support the proper form by providing feedback during the set using their hands as targets for the dumbbells to touch at the top of each rep. Advanced trainees can consider a two to three second pause on top of each rep to maximize muscle fiber recruitment.