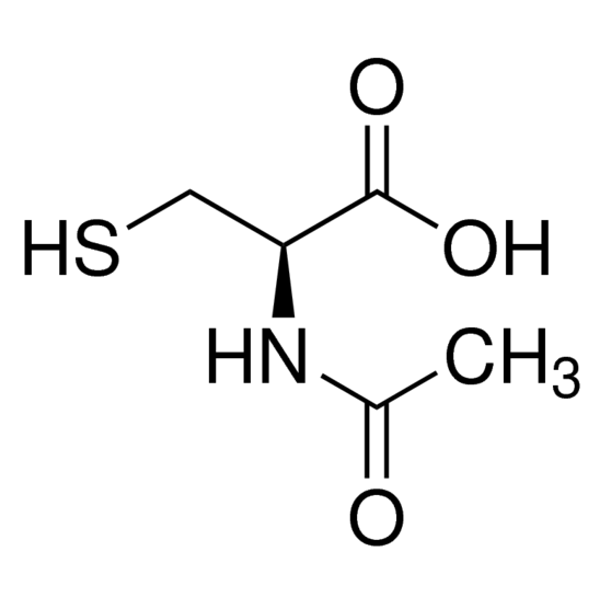 As a SuppVersity reader, you know what hormesis is and are aware that the proinflammatory assault of exercise, is an essential stimulant to musculoskeletal adaptation – a number of human and dozens of animal experiments show: if you quell the production of pro-inflammatory reactive oxygen species with high doses of vitamin C and E the growth and health response to exercise will be impaired. And vitamin C + E are not the only radical scavengers with this side effect.

In 2013, I wrote about a study that clearly demonstrated how N-acetyl-l-cysteine aka NAC “Reduces Inflammation, Muscle Injury & Cytokine Expression, but Impairs Anabolic Signaling, Satellite Cell Activity and Recovery” (re-read it) – keep that in mind before getting overly excited.

Hence, NAC supplements shouldn’t be used chronically. To control the inflammatory response to a workout and be able to return to the grind earlier, however, many people still rely on its noticeable ability to reduce early onset of DOMS (deep onset muscle soreness – learn more).

Is taking NAC ever a good idea for athletes?

Well, the good news for NAC lovers is: When used during a short competition, sportsmen and -women can actually benefit from the anti-DOMS effects, a recent study from the University of Auckland (Rhodes 2018) confirmed when it investigated…

The bad news is that using NAC for that very purpose won’t just impair long-term gains, it would also backfire in terms of the what one could call a delayed DOMS response (if DOMS wasn’t already delayed onset muscle soreness, obviously) on day 5-6 of the recovery period.

Figure 2: Running times (lower = better) and subjectively measured muscle soreness before during and at the end of the 6-day intervention with 1g of NAC in 28 semi-professional, semi-elite male rugby players (Rhodes 2018).

The effects on the actual exercise performance during the shuttle-run, on the other hand, were negligible – yes, this means you can safely ignore them. Everbody can tell that by looking at the running times in Figure 2, … and yes, I don’t care that the results of the “sportsci” parallel group trial spreadsheet (Hopkins 2015) suggest a “likely beneficial performance effect on maximum shuttle sprint time (2.4%; 90% confidence limit ± 4.8%)”.

Whether more helps more is not clear! What is clear, though, is that 2 and more grams of NAC are more prone produce side effects in form of diarrhea, nausea, vomiting, and headache. You should furthermore remember that hormesis is all about managing the exercise stress – not annihilating. If you’re using NAC, using the lowest effective dose should thus always be your goal.

To be fair, I should point out that the authors refrain from claiming to have a found a practically relevant performance benefit, when they write that…”this study was unable to demonstrate a clear effect of 1 g NAC on total time to complete a broken bronco exercise protocol” – that this was due to the low dosage of NAC, which is what they claim right after the cited passage, though, sounds a bit biased; and that despite the quoted results from a 2011 study by Cobley et al. (Cobley 2011), who gave their participants a higher dose of 50 mg/kg/day and observed an increase in YYIRT-L1 performance over time, with the greatest performance enhancement seen on the last testing session (three sessions in total). 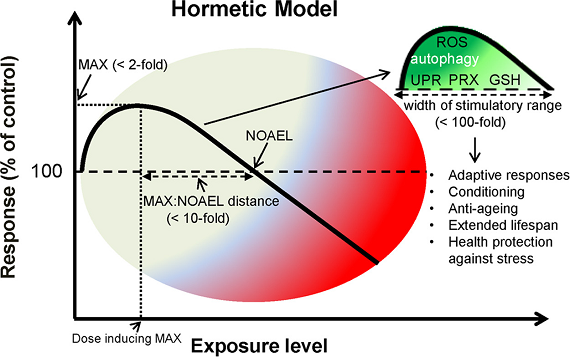 When it comes to choosing whether and at which dose to use NAC (or vitamin C and vitamin E) you must consider hormetic dose-response relationship between stress exposure (X-axis) and adaptational response (Y-axis). Stimulatory effects occur in the low-dose region at the left of the no-observed-effects-level (NOAEL), whereas adverse effects occur in the high-dose region at the right of the NOAEL – The higher your baseline stress the more likely you’ll benefit from antioxidants by reducing the background noise and enhancing the signal:noise ratio (Agathokleous 2018)
Overall, we need more research before we can – with some confidence – advice athletes to consume (high dose) NAC supplements during phases of intense competition; and that is particularly true for the purported recovery- and performance-enhancing effects semi-elite athletes are supposed to experience during exercise sessions with a high turnaround rate.

Taking NAC right before or during a meet or competition may still make sense — I wouldn’t totally exclude that there is a dosage effect, though, accordingly higher dosages (5g vs. 1g) should be recommended to those who want to (ab-)use NAC strategically during what Rhodes et al. aptly describe as “periods of anticipated high energy turnover with limited recovery time, such as during tournaments, competitions, or back-to-back hard training sessions” (Rhodes 2018).

During the training/off-season, however, it would be madness to interfere with ROS formation and IL-6 release as they have been found to be the real drivers of the adaptive response you’re training for… ah, and by the way: To write “I take my NAC away from my workout” in the comments, will only expose your lack of knowledge about the way(s) your body functions. It’s not going to help you soothe your conscience and make you feel good about a habit (=taking your high-dose NAC supplements religiously) that’s almost certainly going to impair your gains – if you actually know what you’re doing, however, and want to use NAC strategically before/during a meet or a short tournament, go for it but mind the side effects (test your individual tolerance before ending up in bed with a headache or on the toilette with diarrhea during the competition) | Comment!