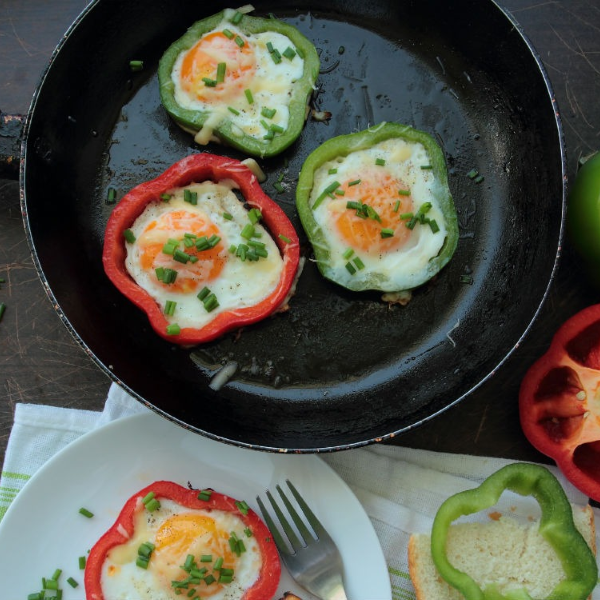 There are 1bn ways to prepare your eggs and the Internet is a rich source of recipes.

You will probably remember the SuppVersity news about the pro-anabolic effects of eggs – whole eggs – from the other day. Now, “gainz” are nice, but as a recent study from the University of Alabama at Birmingham indicates (Goss 2017), they are also a highly useful diet food.

In their recent experimental trial, Amy Miskimon Goss and colleagues investigated the effects of whole eggs, being consumed as part of a low carb diet on the diet-induced changes in body composition, body fat distribution and selected health parameters in aging men and women.

For their randomized clinical trial, Goss et al. recruited 26 men and women aged between 60 and 75yrs. All subjects had a baseline BMI within the “obese” category (30–40kg/m²) and were randomly allocated to consume either …

for 8 weeks. Interestingly enough, participants were not asked to restrict total energy intake. What they had to do, though was to eat the eggs or breakfast bars, the subjects in the EBD and STD group were provided with, respectively.

Figure 1: Overview of the macronutrient composition of the diets (Goss 2017).

The subject’s body composition was measured by DXA, their resting energy expenditure (REE) by indirect calorimetry, and insulin, glucose, HOMA-IR and lipids by analyzing the blood of the subjects after an overnight fast, at baseline and after the 8-week intervention.

How did they lose weight if they didn’t restrict their food intake? That all subjects lost significant amounts of body fat is a logical consequence of being provided with energy-sufficient meal plans thar reflect either a low-carb, high-fat or a high-carb, low-fat macro composition, when the baseline diet is an obesogenic Western Std. Diet with a high fat and high sugar content. In the absence of detailed food-logs to compare the pre-study intake with the food intake in the intervention study, we do yet have to base this assumption on previous evidence.

As you can see in Figure 1 (and probably already expected in view of the ‘ad-libitum’ approach), the subjects on the egg-based low carb diet lost more body fat (11.0% vs. 2.3% total fat | p<0.01 for the difference between diets). Healthwise of even greater importance is that the EBD group also experienced ~3-fold greater loss in unhealthy visceral adipose tissue (aka ‘organ fat’) compared to the STD group (−23.3% vs −7.1%, p<0.01 for the difference between diets). 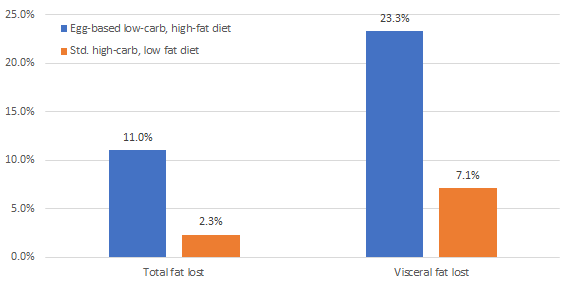 That adding eggs can do the most if you use them to replace refined starches and added sugar is also supported by another ahead-of-print paper. The 3-week cross-over (2-wk washout) study one comes from the Midwest Biomedical Research/Center for Metabolic and Cardiovascular Health Objective and evaluated the effects of a substituting refined starches and added sugars (16% of the total energy intake per day) with a combination of egg protein (Epro; 8% total energy intake) and unsaturated fatty acids (UFAs; 8% total energy intake) – which is basically a lower SFA version of eggs from free-ranging hens – on insulin sensitivity (primary outcome) and other cardiometabolic health markers in overweight or obese adults with elevated triglyceride (TG) concentrations.

The choline advantage: One thing that clearly argues in favor of eggs, though, is that they are one of the best dietary sources of choline which is essential for your metabolic and cardiovascular health and a typical deficiency nutrient in “no egg”-diets (learn more). Furthermore, choline has been shown to promote fat loss when consumed in conjunction with caffeine and carnitine (see “Forgotten Dieting Aids”) and stand-alone when it’s taken during contest prep dieting (see “2g Choline Double Fat Loss”). 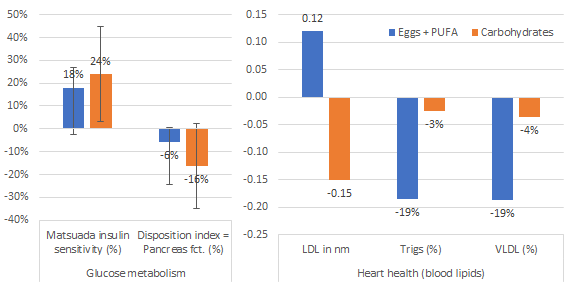 Figure 3: Changes in glucose metabolism and blood lipids (as marker of heart health) in recent crossover study of the effects of replacing refined carbohydrates (16% total energy) with egg-wite + PUFA (Maki 2017).

Bottom line: The study at hand stands in line with previous “egg studies” (read them), which highlight that eggs are a nutrient-dense, health-promoting superfood and not the bad “cholesterol bombs” as which they are still portrayed by both, the mainstream media, and “nutrition experts” who haven’t upgraded their cookie-cutter approach to nutrition since the 1970s.

In spite of the previously mentioned evidence of the health benefits of eggs, I would like to remind you that other low-carb compatible high protein foods could have yielded similar effects.

It’s also worth to note that, in line with previous studies, the effects of the egg diet cannot be ascribed to “any particular metabolic advantage [of low carb dieting] for body fat loss” (Hall 2017), but may be attributed to the ability of ‘low carbing’ to “decrease hunger, reduce appetite and promote satiety” (Hall 2017; Noakes 2017) – nevertheless, we cannot exclude that other foods with a similarly 50%/50% ratio of protein to fat and an “eggscellent” complete EAA profile could have worked just as well… at least until a follow-up study explicitly compares eggs to other low-carb foods show the opposite | Comment on Facebook!