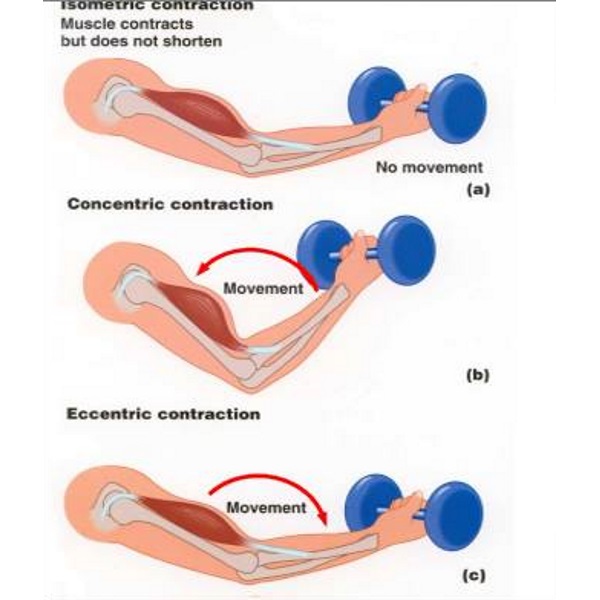 The majority of people training are mostly focused on what exercise they should choose to best stimulate a specific muscle, and lose sight of the fact that execution speed of the movement is just as important. The parameter known as ‘time under tension’ is a very important component here, as it has a great influence on how much you can make the muscle tissue grow. In this article, we will review all the benefits that negative or eccentric exercising has to offer when it comes to building muscle size.

The basics of negative training

Before exploring what eccentric exercising really is, we must first determine the three separate phases of a lift, and those are: the concentric part, isometric part, and the eccentric part.

Every time you are lifting either the dumbbell or the barbell, like when you are doing a biceps curl, you are executing the concentric part of the exercise. In this part of the movement, the muscle fibers contract, this gives the name of the phase.

During the execution of this part, you directly stimulate the muscle which results in a force being produced, but there is no movement of the joints. Think of the moment when the arms are fully extended on the bench press for example.

The eccentric part is the last part of the exercise where you are lowering the weight in a controlled manner and elongating the targeted muscle slowly. When you slowly lower the load to its starting position, muscle fibers lengthen as a protection mechanism from you sustaining an injury, like if you were to drop the weight all of a sudden. In this case, eccentric training is synonymous with negative training.

When you stretch the muscle, micro damage is done on the muscle fibers, which stimulates the release of local factors for growth, triggering anabolism. There is an interesting fact that when you do the eccentric part of the exercise, the muscle is actually much stronger than in the concentric part. This is one of the primary reasons why you should start using negatives with heavy loads. A skillful spotter could help you do these eccentric with correct form. If gaining strength and building muscle is your main goal, controlled eccentrics are the way to go.

Eccentric training and its effect on metabolism

Numerous studies have confirmed that accentuating the negative part of a movement and performing it slowly and with control increases the resting energy spending of the athlete. For example, doing a full-body training session where the concentric part lasts on second and the eccentric lasts three seconds increases the resting energy expenditure by ten percent after you’ve finished training.

The advantages of negative training

If you are only beginning to train, avoid doing maximal or near-maximal negative training.

When doing an exercise with a bigger weight than your one rep max you are training in a supramaximal manner. You can improve this type of training by adding supramaximal loads to your eccentric training sessions. It has repeatedly been proven to be a perfect the rehabilitation process after recovering from a low body injury.

No matter the type of eccentric training you’ve decided to start doing you should always ensure that you do a proper warm-up lasting about 15 minutes. You should always do a few warm up sets using lighters loads before you start doing the working sets with heavy eccentrics.

Let’s illustrate negative training with an art training session example. We’ll use the barbell biceps curl exercise. Let’s assume you can curl 50 lbs for a maximum of eight repetitions. This time you will do a warm-up set with 50 lbs. Rest for half a minute, and then start curling 55 lbs. Try going for at least six to eight repetitions, but try to execute them with a proper form and lower the weight in a slow and controlled manner. The concentric part shouldn’t be longer than a second and the eccentric part should last around 3 seconds.

Do the next set with 60 lbs. Always use the ‘one second concentric, three-second eccentric rule’. Continue doing three or four working sets increasing the load by five percent with each consecutive set.

Eccentric training is an excellent way to build muscle in a very short time-span. And not only that, this type of exercising will also give you increased strength. Heavy loaded eccentrics will stimulate your muscles to grow at a faster rate. That’s why the next time you are in the gym and look at someone swinging their weights, remind yourself of negative training and start doing the exercises the right way. Just because you are swinging heavy weights doesn’t necessarily mean you’ll build more muscles faster.