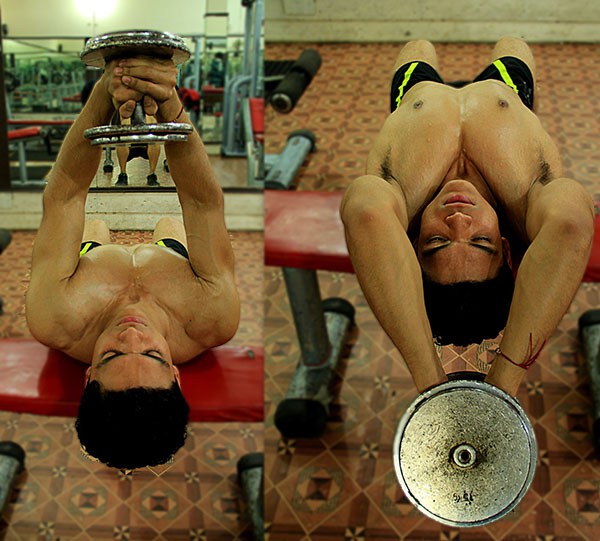 The pullover might be the most controversial exercise in the world of bodybuilding. According to most experts it’s one of the most effective chest and back exercises. At the same time, slight adjustments in your pullover technique can shift its target to different body parts.

It’s effectiveness in activating different upper body muscle groups has been known for decades. In fact, together with the squats, this exercise is one of the oldest tricks in the book of bodybuilding. It can give you that great feeling of pump in your chest, stretches the lats, builds up the seratus, and has even been attributed with the ability to stretch your ribcage.

The only known downside of pullovers is that can overload your shoulders. And although years ago everyone was doing it, nowadays it seems almost forgotten.

In this article we’re going to try to prove this theory wrong, and reintroduce the pullover into your routines in all of its former glory.

The Early History of Pullover

The pullover was first declared the best exercise for developing a deep chest by Alan Calvert, founder of the Milo Barbell Company and Strength magazine, around 1911. It quickly became staple exercise for upper body development. In fact, back in the 1920s, the most popular bodybuilding method involved drinking gallons of milk and performing heavy, high-rep squats combined with light, high-rep pullovers. Needless to say, the combo of big lifting and big calories turned this recipe into a success story. Everyone was doing it.

Back then the bodybuilding trend was to perform low volume workouts that included one or two upper body exercises. The pullover (or breathing pullover, as it was known) was included in this type of training more often than not.

The widespread belief was that it helped in expanding the ribcage, presumably as a result of the intentional deep breathing between reps, which stack up to the deep breathing necessary for performing the squats earlier in the workout.

Although the ribcage expanding capabilities of this exercise have been long proven a myth, plenty of lifters reported great results from combining the squats with pullovers, backed up by sturdy amounts of milk.

The Road From Favorite to Forgotten

During the period of popularization of bodybuilding in the 1950s and ’60s, the pullover retained its status of an essential exercise for upper body sculpting. Having in mind that they considered having thick barrel chest an ideal, the pullover fitted perfectly in their plan.

By the 1970s and ’80s, the gyms were better equipped and had greater variety of specialized machines for targeting specific bodyparts. Even the pullovers got their own mechanized variation in the Nautilus pullover machine invented in the early ’70s by Arthur Jones.

However, the greater reliance on machines was also the reason for the drop in popularity of some old-school free weight classics, such as the free-weight pullover. As a result, its popularity diminished in the ’90s. Since then, its reputation has been tarnished by various “exercise scientists” who managed to kill its good name by saying that it was ineffective, and dangerous for the shoulders.

On the other hand, this is the complete opposite to the testimonials from legends, who have nothing but praises when it comes to the pullover, and for all the different reasons.

Arnold credits his epic chest to performing dumbbell pullovers. On the other hand Dorian Yates and Mike Mentzer worked their lats on the the classic Nautilus pullover machine. The heavy pullovers have been part of Ronnie Coleman’s back training, while Frank Zane attributed his serratus muscles development to doing pullovers from young age.

You must admit that this is an impressive list of names of people with enough gravity to make any armchair fitness expert blush. It’s up to you to choose whose lead to follow.

The main argument against pullovers is the fear of shoulder injuries. After all, this exercise puts your body in an awkward pose of your body while moving a heavy weight with fully extended arms over your face. So if you don’t have enough strength in your shoulders and good shoulder mobility it can be straining.

However, by working on your shoulder and upper back mobility you can overcome this problem. To test if you are ready for the pullover, try whether you can perform overhead press or chin ups with full range of motion.

Once you are certain that you have sufficient shoulder mobility you can try your hand at this classic move.

To perform the classic dumbbell pullover, we recommend lying on a bench with your full back. Avoid using the variation with the upper back across the bench, as it will bring you no major benefits, while it can affect your range of motion.

Take a light dumbbell with both of your hands holding it against the plates above your chest. Keep both arms straight and start lowering the weight slowly towards your head. Maintaining the muscle to mind connection is the key to performing a successful pullover. You should feel all your upper body muscles stretching.

Lower the weight with almost locked arms behind your head as far as you can. Test your limits, but don’t push it too far. It should feel comfortable. Pull back in to the starting position.

Performing several sets with lighter dumbbell allows you to check out your body system and see how your shoulders, chest and lats are taking the strain of the exercise. It also allows you to discover the focal points of the exercise. Do another test set using light barbell or EZ-curl bar. The mechanics of the movement are the same, just that you hold the bar with pronated grip. Repeat the tests with different hand positions, varying the grip from wide, to close and neutral. If any of the light weight tests result in shoulder pain, or awkward feeling in the shoulder, you should avoid doing it, especially with heavier weights.

The dumbbell pullover earned its reputation as one of the best chest builder exercises. It’s only natural, because this complex move incorporates all the benefits of dumbbell flyes and cable crossovers in all of their variations. It provides both shoulder extension and shoulder adduction.

However, if you want to add pullovers in your chest routine, we recommend using them as a finisher exercise after other muscles are already fatigued. The main reason for this is that the pullover requires the participation of great many muscles, despite the fact that the primary focus is on the pecs. It’s execution also requires a good mind to muscle connection making a poor exercise for beginning the chest day.

We recommend performing 3-4 sets with 8-15 reps of barbell or dumbbell pullovers at the end of your chest day. Make sure that you squeeze the pecs at bottom position to initiate the movement and try keeping them tensed throughout the rep.

Use Pullovers to target the Lats

With slight variation you can also use the pullover to isolate the lats, greatly eliminating the help of the other muscles. This makes the pullover a perfect isolation exercise for developing the back. If you want to target your lats, you should bend the elbows and flare them out slightly. Focus on pulling with your elbows, while keeping the forearms and hands relaxed to eliminate biceps contribution.

When the pullovers are used as lats pumping exercise perform them as the first exercise on back day. They will pre-fatigue the lats and contribute to improving the mind to muscle connection.

Perform 4 sets with 8-12 reps of dumbbell pullovers with your elbows slightly bent. Slowing down the rep speed will help you focus on isolating the lats.