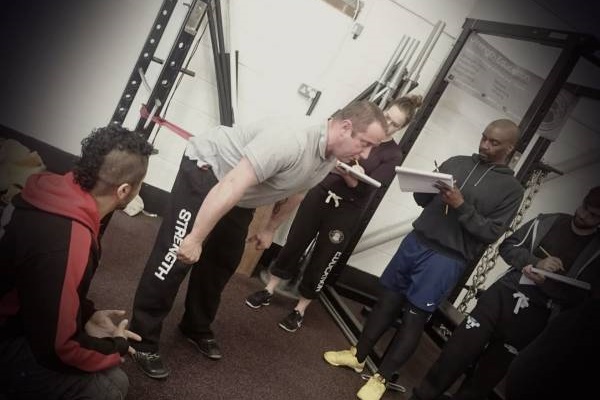 I’ve always considered myself a minimalist at heart, so I guess it’s not surprising that my favorite training modality is bodyweight exercise. It’s simple, effective, portable, and easily scaled.

Bodyweight training also focuses on movement before muscle isolation. Think about it – almost all bodyweight exercises are total body exercises. Squats, chin ups, push ups, and lunges are all movement-based exercises. They’re functional, essential, and utilized on a daily basis.

Yet there is one glaring issue with bodyweight exercise – it lacks an effective way to train the hinge movement.

The Hinge Is an Essential Movement

The hinge is an essential movement that must be trained. It consists of folding over from the hips while keeping the spine neutral and stacked. When performed correctly, hinge exercises train the glutes, hamstrings, and the entire posterior chain in a functional manner. Common hinge exercises include deadlifts, kettlebell swings, and stiff-legged deadlifts. But these need added equipment.

The hinge is an essential movement that must be trained.

What if you love bodyweight training and aren’t a big fan of the weight room? What if you are training on the go and can’t bring kettlebells with you? Fear not! I’ll detail a few minimalist solutions to help you train the hinge with nothing more than your bodyweight and some resistance bands.

When it comes to bodyweight-based alternatives for the hip hinge, many people like to use exercises that focus on the muscles of the posterior chain. Common choices include bridges, back extensions, or locust pose, to name a few. While these are good ways to train the muscles of the posterior chain, they don’t work the hinge movement. When it comes to functional training, you must train the movement, not just the muscles.

There is one exercise that works the muscles of the posterior chain in a hinge-like manner, yet it’s not exactly a hinge. That exercise is the bodyweight hip thrust. I think of the hip thrust as a pseudo-hinge. It works many of the same muscles as other classic hinge exercises, but the movement isn’t quite a hinge.

Yes, the hips do hinge during the hip thrust. The hip thrust also focuses on the posterior chain and loads the glutes. And yes, you continuously move through hip flexion and extension during this movement. However, it’s still not technically a hinge because of your bent knees and prone position. This is why I refer to the hip thrust as a pseudo-hinge. It’s almost like the hinge’s cousin, and an attractive one at that.

Even though it might not be a classic hinge, the hip thrust is a valuable exercise. It loads the glutes in a unique way, helps develop forward hip drive, and is a great introductory exercise. It can also act as a substitute for the hinge when you find yourself without any equipment.

My favorite banded hinge exercises are demonstrated in the video, and include:

Band Dead Lifts: It’s a classic hinge exercise, it needs no real introduction, and it’s simple to replicate with resistance bands! Stand in the middle of the band, grab an end with each hand, and proceed to dead lift just as you would with a bar. Increase the resistance by choking down on the band with your hands, or use a heavier band. That’s about as easy as it gets.

The Banded Good Morning: Good mornings are often forgotten as a hinge exercise. The best thing about good mornings is that they’re effective with a lighter load at higher reps.They also train the hinge at a higher angle than the traditional deadlift.

Standing Hip Thrust: Earlier we discussed the classic hip thrust and how it’s not a real hinge. However, there is a hip thrust variation that works the hinge. The standing hip thrust is a rarely used exercise that places unusual stress on the glutes. Unlike deadlifts or good mornings, the standing hip thrust resists force in the horizontal plane, training your hinge in a new way.

Banded Good Morning/Standing Hip Thrust Combination: This is actually an exercise I invented (to the best of my knowledge). But whether I actually invented it or not, it’s one hell of a hinge exercise. The combination of vertical and horizontal force, the way it taxes the glutes, and the ease of set up are all fantastic qualities. I would suggest becoming comfortable with both exercises on their own before combining the two.

There’s no reason to be without a way to effectively train your hinge. With these minimalist approaches, you’ll never have that problem. All you need is a little creativity, some bodyweight training knowledge, and a few bands. Now, get training!