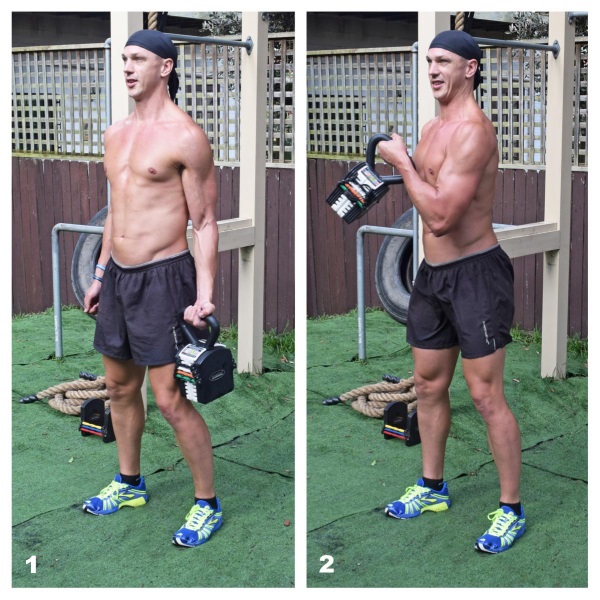 Kettlebell Curls provide exclusive hypertrophy benefits and unique bicep stimulation, which are difficult to replicate with other training tools, including standard free weights. Here are two unique bicep kettlebell movements that are sure to give you newfound arm growth.

Due to the nature of the kettlebells, there is significantly more constant tension throughout the movement, including the top contracted position. As a result, you have greater muscle fiber innervation and motor unit recruitment. Besides the bells hanging below the wrists, which creates a constant pulling sensation on the biceps, it’s almost impossible to alleviate tension at the top of the movement by cheating and curling the weights too high.

In fact, over-curling at the top of a Bicep Curl is a surefire way to take stress off the biceps and overtax the anterior deltoids. With this variation, the kettlebells pressing against the forearms inhibit this common cheating technique, since it feels unnatural and uncomfortable to bring your hands beyond chest height. In addition, any swinging or excessive use of momentum results in the kettlebells banging against the forearms, a very unpleasant experience. In essence the kettlebells force you to use proper curling technique, because typical cheating methods are limited or completely nullified.

Although execution is similar to other Bicep Curl variations, one notable difference is hand positioning. For all Kettlebell Curls, it’s best to rest the handles in the mid-upper palms of your hands rather than the lower palms and fingers. This hand position locks the kettlebells in and keeps them from rotating and slipping.

Finally, you want to resist having your arms fully straighten at the bottom of the movement, as this releases tension from the biceps and can cause the handles to slip out of your palms.

Several sets of 6-8 reps at the beginning of your biceps workout will recruit all available muscle fibers for maximal growth.

Kneeling Alternate Kettlebell Curls from Contracted Position
If you’re looking for one of the most challenging but growth-inducing biceps movements you’ll ever perform, Kneeling Kettlebell Curls performed in an alternate fashion from the contracted position is just what the doctor ordered. This is due to the incredibly strict form and reduced momentum required to maintain balance and to the heightened levels of continuous tension on the biceps. Although the exercise sounds a bit complicated, it’s actually quite simple. While kneeling on a bench, curl both of the kettlebells to the top contracted position (approximately mid-chest height), lower one arm, perform a Bicep Curl, then repeat with the opposite arm.

The key is to hold the non-moving arm in the top contracted position throughout while alternating from side to side with each repetition. Performing this same protocol with dumbbells is not nearly as effective, because the top of the Dumbbell Curl typically involves little tension, thereby providing a semi-rest period during the isometric phase. However, because of the kettlebells’ unique loading features, the top position is actually quite taxing on the biceps, providing constant tension with little if any relief throughout the movement. In addition, the kneeling position ensures you neither twist nor contort your body as a means of intentionally providing tension relief to your arms. Any squirming, shifting or cheating results in losing your balance and dumping the load.

Because of the significant time-under-tension effect and extended time between repetitions, 2-3 sets of 5-7 reps per arm more than suffices for this grueling bicep movement.